During the last election cycle, a large portion of the US population became enticed by Bernie Sanders, who repackaged the old idea of socialism under a new name: Democratic Socialism. The younger generations, who don’t have much of a perspective outside US politics, ate up the old socialist’s dogma even though the world has seen these ideas fail before.

One of the most devastating failures of Democratic Socialism came from the Bolsheviks during the Russian Revolution. Their revolution turned into one of the worst genocides in world history. However, Europe has implemented a much tamer version of Democratic Socialism over the past several decades called Social Democracy. Although these attempts did not erupt into genocide, their failure now seems just as inevitable. Populism is the new ideology in Europe and it is now overwhelmingly defeating Social Democracy.

In the Italian election that took place just over two months ago, the populists and right-wingers handed the centre-left (Social Democrats and others) a decisive defeat. The Democratic party was expecting to do poorly in the election, but now senior figures within the party admit that it was much worse than they expected.

A year ago, the Austrian election gave its centre-left the two worst consecutive losses in the post-war era. The centre-right and far-right have surged into power, which is far from usual for Austria. The Dutch Labour Party’s share of the vote has collapsed from 26% to under 6%. The French Socialist Party has recently fallen to a historic low in votes, from 30% to just over 6%. The Czech centre-left has also plummeted from 20% of the vote to 7%. This is the Czech centre-left’s worst result since 1992. The German centre-left has tallied its worst election result since before WWII in 1933.

These are only a handful of examples where the left-wing/Social Democratic parties of Europe have taken major defeats. Back in 2000, centre-left parties controlled 67% of all EU nations. Now, they control just over 20% of all EU nations. And the remaining Social Democratic nations aren’t exactly influential (e.g. Malta, Slovakia, Portugal, Romania and Sweden). Below is a chart of just how severely Social Democracy is being defeated by populist parties in Europe. 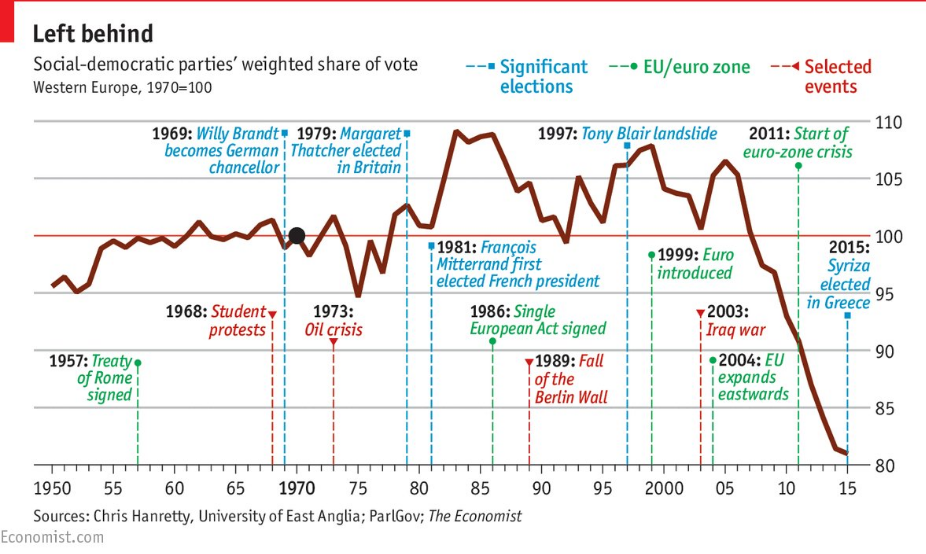 Democratic Socialism or Social Democracy may sound like and new and improved political system to US citizens, but it has been well-established and tested in Europe for decades. Now European voters have had enough. The elites that push Social Democratic policies have pushed too far. The over-centralized mess and rampant immigration of the European Union has voters turning to decentralized populism instead. Will the US turn that way as well, or will they be enticed by socialists like Bernie Sanders? We shall find out in 2020.