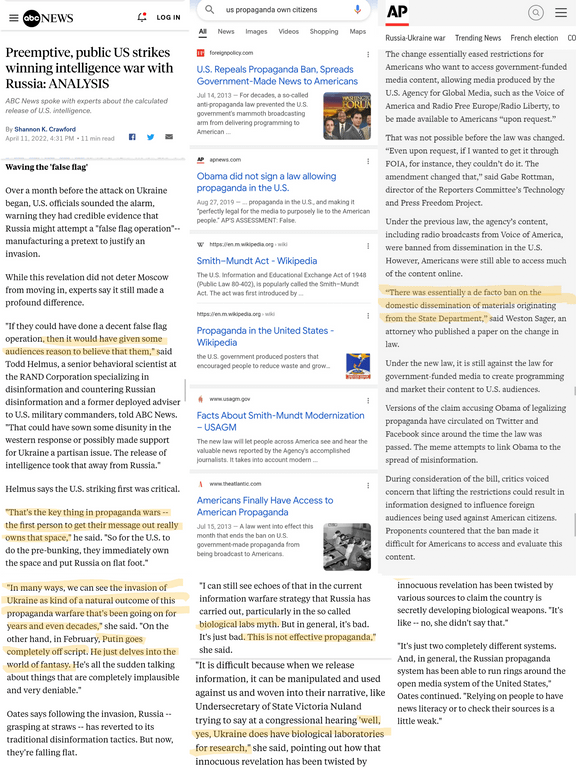 ABC news articles on the US intelligence war against Russia (which is different than the information war):

“If they could have done a decent false flag operation, then it would have given some audiences reason to believe that them,” said Todd Helmus, a senior behavioral scientist at the RAND Corporation specializing in disinformation and countering Russian disinformation and a former deployed adviser to U.S. military commanders, told ABC News. “That could have sown some disunity in the western response or possibly made support for Ukraine a partisan issue. The release of intelligence took that away from Russia.”

“That’s the key thing in propaganda wars — the first person to get their message out really owns that space,” he said. “So for the U.S. to do the pre-bunking, they immediately own the space and put Russia on flat foot.”

So the Ghost of Kyiv/Keiv and Snake Island sound like the implementation of this strategy.

Meanwhile, Sarah Oates, an expert on Russian media and propaganda at the Wilson Center, says that while the Kremlin was extremely disciplined and adept in its anti-democratic propaganda and portrayal of NATO as an enemy force out to destroy Russia, Putin veered off course in the final days before the invasion.

“In many ways, we can see the invasion of Ukraine as kind of a natural outcome of this propaganda warfare that’s been going on for years and even decades,” she said. “On the other hand, in February, Putin goes completely off script. He just delves into the world of fantasy. He’s all the sudden talking about things that are completely implausible and very deniable.”

So US propagandists are responsible for the invasion of Ukraine? Sounds terrifying that lead antagonist Putin went off script and into a “world of fantasy.”

“I can still see echoes of that in the current information warfare strategy that Russia has carried out, particularly in the so called biological labs myth. But in general, it’s bad

CLAIM: Former President Barack Obama signed a law in 2012 allowing government propaganda in the U.S., and making it “perfectly legal for the media to purposely lie to the American people.”

AP’S ASSESSMENT: False. In 2013, Obama signed legislation that changed the U.S. Information and Educational Exchange Act of 1948, also known as the Smith-Mundt Act. The amendment made it possible for some materials created by the U.S. Agency for Global Media, the nation’s foreign broadcasting agency, to be disseminated in the U.S.

“There was essentially a de facto ban on the domestic dissemination of materials originating from the State Department,” said Weston Sager, an attorney who published a paper on the change in law.

Under the new law, it is still against the law for government-funded media to create programming and market their content to U.S. audiences.

Versions of the claim accusing Obama of legalizing propaganda have circulated on Twitter and Facebook since around the time the law was passed. The meme attempts to link Obama to the spread of misinformation.

During consideration of the bill, critics voiced concern that lifting the restrictions could result in information designed to influence foreign audiences being used against American citizens. Proponents countered that the ban made it difficult for Americans to access and evaluate this content.

“When it was first passed in 1948, the ban wasn’t even about protecting the public from propaganda,” Emily Metzgar, professor at The Media School at Indiana University, told The Associated Press. “The ban was about protecting a nascent broadcast industry in the United States in the early post-war years… . But these restrictions became framed as something that was about preventing the poison within those agencies from being distributed to the American public.”

This is part of The Associated Press’ ongoing effort to fact-check misinformation that is shared widely online, including work with Facebook to identify and reduce the circulation of false stories on the platform.