ONE OF THE MOST OVERBOUGHT MARKETS IN HISTORY 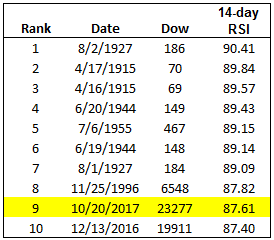 A scary little statistic is buried beneath the US economy’s apparent stability: Consumer-debt levels are now well above those seen before the Great Recession.
As of June, US households were more than half a trillion dollars deeper in debt than they were a year earlier, according to the latest figures from the Federal Reserve. Total household debt now totals $12.84 trillion — also, incidentally, about two-thirds of gross domestic product.
The proportion of overall debt that was delinquent in the second quarter was steady at 4.8%, but the New York Fed warned over transitions of credit-card balances into delinquency, which “ticked up notably.”

We were in the process of writing about the technical pattern in the VIX when we came across some research by Peter Schiff of Euro Pacific Capital illustrating the historical correlation of the CAPE/VIX Ratio to US Recessions go back to 1990. We have been warning about a unexpected US Recession scare coming in 2018. 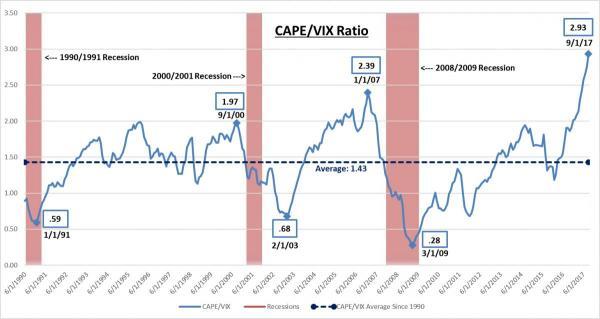 A fairly reliable technical indicator is a megaphone topping pattern. We annotated Schiff’s chart to more visibly reflect this.

If the possible message this chart is sending then we should soon see the VIX rise and the CAPE fall. Is this reflected in the VIX and CAPE technicals.

Debt Growth Is Holding Back GDP

Even though growth is picking up, credit rating agency Moody’s argues that this growth will not make it any easier for policymakers to raise interest rates.
In a research report published at the end of last week, Moody’s analysts point out that the “downshifting of US real GDP’s 10-year average annual growth rate has coincided with a climb by the ratio of nonfinancial-sector debt to GDP.” In other words, slowing economic growth has resulted in more leverage:
“When the average ratio of nonfinancial-sector debt to GDP rose from the 135% of 1960-1984 to the 175% of 1985-2001, the average annualized rate of real GDP growth slowed from 3.6% to 3.3%, respectively. In conjunction with the 229% average ratio of debt to GDP since 2001, real GDP growth has slowed to 1.9% annualized, on average.”

2 thoughts on “This One Of The Most Overbought Markets In History, Virtually Everyone Is Long The Market… Danger Ahead!”