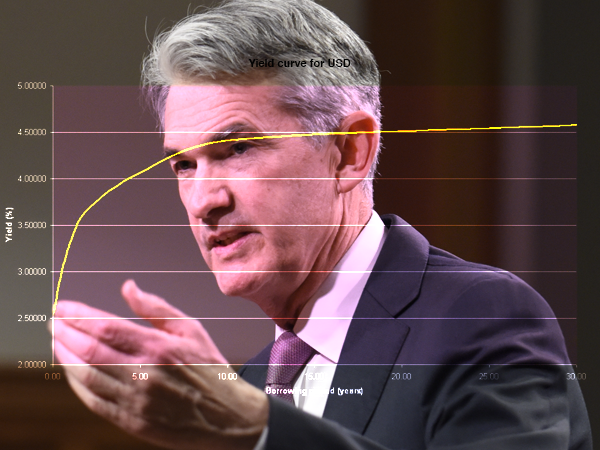 Looks like the yield curve the Fed swept under the rug back in June continues to prove itself a reliable potential signal for market correction.

On Tuesday the Dow Jones continued to trend downward since October 3rd, dropping 800 points. As this is being written, it had dropped another 499 points to 24,467.

You can see the downward trend and increased volatility in the chart below (source):

An article over at MarketWatch highlighted the yield curve between 2-year and 10-year treasury notes as one potential signal of Tuesday’s drastic drop:

At least part of the downturn comes amid an ominous narrowing in the spread between U.S. 10-year Treasury note TMUBMUSD10Y, -1.26% and two-year Treasury note yield TMUBMUSD02Y, -2.59% to the tightest gap, about 10 basis points, in about 11 years.

As of December 4th the Treasury finally had the curve flattening to 11 basis points (see the chart below):

Once again, this is the flattest the yield curve has been since 2008, demolishing the earlier record of 25.2 basis points only a month ago.

The MarketWatch article also highlighted the reliability of yield curve inversion as a signal for each recession since 1975:

A so-called yield-curve inversion, where the yield on shorter-dated debt rises above that of longer-dated bonds, has been a feature that has preceded every recession since 1975.

So with a tightening yield curve poised to invert, and set to prove itself a reliable market signal once again, where might the Fed be going from here?

The Fed Seems Stuck Between a Rock and Hard Place

Until the yield curve inverts, its historically strong signal for recessions isn’t quite definitive. But the last 30 days have been like a noose that’s quickly tightening. Time is already running out on the Fed’s idea that slowly rising rates is “neutral.”

It seems like Chairman Powell and the Fed are stuck between a rock and a hard place. On one hand is a tightening job market, and on the other is the yield curve relentlessly flattening. Not to mention the dow is dropping more violently than ever.

The International Business Times hinted at the possible consequences back in September:

The decision of which to heed looms large when the Fed’s interest-rate setters meet next week. Which path they follow will begin to define whether Chairman Jerome Powell engineers a sustained, recession-free era of full employment, or spoils the party with interest rate increases that prove too much for the economy to swallow.

One more rate hike is certainly on its way in December, according to the Fed’s own statement. It looks like they are rolling the dice on job market risk.

Here’s to hoping their roll doesn’t come up “snake eyes.”

The MarketWatch article concluded by highlighting the general uncertainty in the markets going into 2019:

All this macroeconomic uncertainty is clouding the 2019 earnings outlook, leading to increasingly violent equity swings as investors try to handicap what 2019 will look like, wrote Alec Young, managing director of global markets research at FTSE Russell.

The Fed’s recent “blind eye” to the yield curve seems like it wants to “buffer” what is really happening. But reality will prevail, even if the Fed is obscuring it.

It’s difficult to trust Chairman Powell’s recent statements. As a precaution, hedge your bets while you still can, and don’t let them hinder your ability to create a secure retirement.